Transphobia is disgusting and violent. 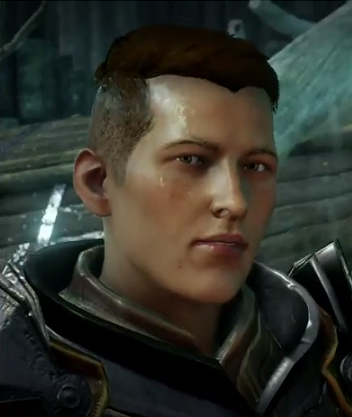 Krem is a trans man.  Growing up, he was raised to be a girl, but would rather sit and shave with his father.  Even when faced with the possibility of slavery unless he married a rich merchant, Krem still said no.  He joined the military, only to “desert” because the military doctor he had bribed to cover up his body was switched out and the new doctor had to open their mouth.  Krem was caught and several hurt before Iron Bull came and recruited him for his band of misfits.

Krem isn’t the first or last trans character in video games.  I was a bit sad when I couldn’t romance him, or at least get close to enough to know more about Krem and who he is besides being Bull’s right hand.

Trans people, especially (trans) women of color, will always have it hard until we as a people go back to a time where they were celebrated for their freedom.

It’s very heartbreaking when people deny someone’s being because of what body parts they were born with.  It’s such bullshit that in a time of “peace and love” and “love trumps hate”, there’s still motherfuckers out there who can’t mind their own fucking business when it comes to how someone wants to live their life when it doesn’t harm another person.

At birth, our parents are told what gender we are due to our genitals.  As we grow up into our own person, sometimes the doctor who sexed us is wrong.  Sometimes, people feel they were the wrong gender because of childhood trauma. Sometimes, people don’t want to be associate with a gender.  None of these things are hurting other people like racism or sexim, but for some reason, it makes cis people uncomfortable.  It makes them so uncomfortable that it makes them violent.  Why?

Why does a complete stranger living in their truth bother cis people so much?

This past week, a cis black actress made a statement regarding the struggle that other women face, stating that it was “trans woman’s issue“.  It’s so violent and gross to say that.  Women who happened to be born with a penis in no way have “male privilege”.  Because of who they are and how they live their life, their “male privilege” has been revoked by other men, who beat and rape them and kill them like they do cis black women.  Cis black women turn right around and spew homophobic bullshit at them, just calling them men in dresses and wigs, while crying and sobbing about Rebecca and Jessica calling them feminine men.

The struggle cis women put on their sisters for no reason is just… trash.  It’s literally just trash.  You’re really out here telling your friends, family, people you care about that you don’t see them as real women because of this weird standard held by patriarchy, while trying to dismantle it?  How?  How are you trying to fight something that defines womanhood based on your fucking pussies, but then turn around and use those standards to talk shit to your sisters.

Y’all are trash for being violent to your brothers and sisters because they don’t fit in your binary of what is or isn’t manly or feminine.  Y’all are just straight up garbage for treating your siblings like less than because you feel as such next to their greatness.

Instead of writing piece after piece about why trans people aren’t the “real” gender they “claim” to be, why not just read piece after piece of literature written by a trans person??  Why not use Google to figure out a question you might have, to see if it’s already been answered?  If not, do not demand they educate you in a calm manner.  Some people had to figure out who they are by themselves, so they might not have all the answers you’re looking for.

Afro-futurist/optimist writer. Trans. Not with the shit. $robinsteele21 View all posts by Robin Steele