The topic of religion in Mass Effect has popped up a few times, but it’s mostly geared toward learning the alien religions from a human perspective.  There’s only been a few times where Shepard/Ryder has any interactions with a fellow human about their own religions.

Ashley from the original Mass Effect doesn’t really specify what religion she ties herself to, she just believes there is a God. Someone HAD to create all of the shit she is experiencing and seeing, right?  Same goes with Suvi from Mass Effect: Andromeda, however, she takes it from a scientific point, trying to figure out the signature to life itself is like the Fibonacci sequence.

In Ashley’s case, you get to know where she stands by having one talk with her about it after a few missions. 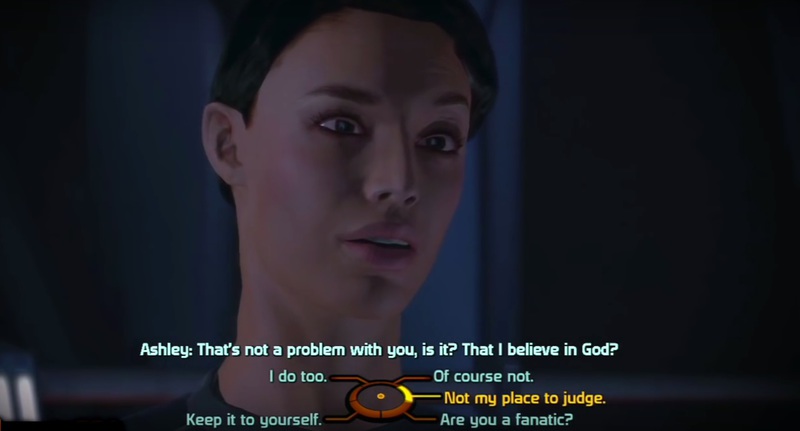 Whereas with Suvi, you can talk to her every so often and have an actual conversation with her about it. 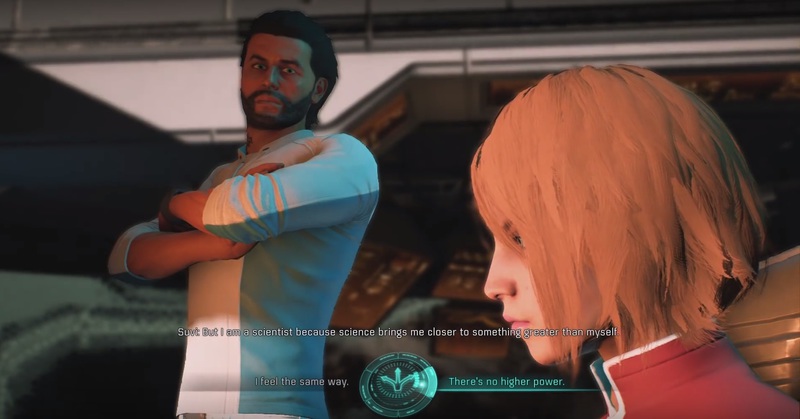 Even in the years 2183 and 2783, humans still can’t figure out if there is a god.  And to be perfectly honest, I think it’s somewhat refreshing and humbling.  At the same time, I am weary for our future.  If the main players of religion (European and white) have their way, God is an angry white man, Jesus is a white Republican, aliens aren’t real, will never be real, and even though the universe is fucking huge and infinite, life only exists on planet Earth.

We don’t really think about more indigenous religions when the topic of science comes up, unless we’re talking about aliens in science fiction.  To some, indigenous religions are under the category of “spirituality”, since they seem to have looser “rules” than Christianity or Catholicism.  While spirituality doesn’t have to be set in a religion, people seem to think that having a religion makes them inherently spiritual while shaming those who don’t follow a doctrine.

Since I don’t think I’m smart enough to try to even dip my pinky toe into the science field, not rich enough (or white enough) to sit in talks with philosophers and too annoyed with religion as a whole to stick to doctrines, my take on spirituality and science is a secret love affair at most.

Both science and spirituality have wiggle room for me to be comfortable with knowing that it’s okay to not know everything and anything and that I can interpret my life how I see fit.  Science tells me that I am one person in a place full of billions, on a planet in a solar system in a galaxy, in a universe that goes on forever and ever and that I honestly don’t mean anything in the grand scheme of things.  However, spirituality tells me to seize this opportunity to do great things, even if the grand scheme as a whole means nothing.  The grand scheme, TO ME, is that even though I’m probably dead to some alien scientist who is looking at my galaxy through their own version of the Hubble telescope, I can still do great things in my blink of an eye of life.  I can still find out what life has in store for me, even though I know my life can end at any moment.

I take comfort in the cold, harsh truth that is science because I know that my spirituality will be there to remind me that I can still make the most and do the most from that truth.  It’s comforting to me that even though I know I will die, I still don’t know when, so I should make the most of it when I can.  It’s comforting to know that science can help me figure out the truths of my life so I can work my spirituality making the truth go down easier.  I can accept the end because what I do before then is all that matters.

Afro-futurist/optimist writer. Trans. Not with the shit. $robinsteele21 View all posts by Robin Steele